He ain’t heavy he’s a Boson 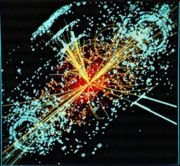 The numbers are staggering: a ring 27 kilometres around. Particles travelling at 99.999999% of the speed of light. Over 4 thousand scientists working on it for years and years. And all for what? Creating conditions that existed one trillionth of a second after the Big Bang. But the most amazing thing was that all this was being explained by Professor Brian Cox, a particle physicist who played in D-Rem. Well for him at least things really got better.

I was frankly disappointed that we (the earth) weren’t gobbled up by a micro black hole created by the collision of these two beams of particles. The Nobel Institute would have got as far as announcing “...And the Nobel Prize for Physics goes to Stephen Hawkins...” and then we’d have all vanished into his predicted black hole.

But who understands all this? The media clearly decided that none of us viewers/listeners would. That’s why they all focused on the technological and engineering aspects of the “Big Bang” at CERN. Except, of course, it’s the physics and maths behind it that led to the construction of the £4 billion Large Hadron Collider. The Higgs Boson (HB) – that’s what it’s all about. Now the Standard theory explains almost everything in the universe from the very large to the very small, except it didn’t include mass. To get round this rather obvious omission a very bright British physicist named Peter Higgs in the early 60’s came up with the Higgs field. If you factor this into the standard model you get mass, which is quite helpful, since all observed elementary particles have mass (except a photon which is mass less – don’t ask).

We know that every field has a particle associated with it, so if we can observe the particle we can infer the existence of the field and therefore we have evidence for the mechanism to give mass to matter and our Standard Theory can take a bow. There are a number of logical steps here which I’ve missed out – because I don’t understand any of this. However, notwithstanding my ignorance, all the thousands of scientists have been working to get the conditions just right so that, if HB is there, they can find it.

The trouble is that the HB is a rather shy fella. To put it bluntly, its best period is long past - about 13 billion years past. It’s suspected that in space, under similar conditions to that being generated at CERN, the HB makes an appearance, but that’s about it. Also, it doesn’t hang around. Not for it the eternity of the proton, electron and neutron. No, Mr HB makes an appearance for an teeny weenie speck of time – yes it’s that small - before turning into something else which in turn turns into something else altogether. This something else altogether is what they hope to see in the instruments at CERN.

I remember a Christmas present over 50 years ago. A slim book of astronomy, in which you had to cut out pictures of stars, planets and moons and stick them in the correct page. I also remember staying up with my grandma to see a comet and the excitement of a partial eclipse of the sun. As a teenager I read sci- fi avidly and was enthralled by the Quatermass series on the BBC (it was so much better in black and white).

The events at CERN rekindle the young boy in me; re-awaken the wonder and the imaginative flights I had as a child. And when at times it feels that we’re in deep do do, when nothing seems to be working out; the awesome achievements of the human mind and its ability to conjure up and understand the majesty of nature breaks through like a shaft of sunlight. And you think "Shit, isn't all this so amazing."
Email Post