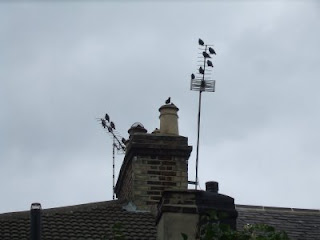 This morning my wife excitedly called me into the garden. Hundreds of starlings had suddenly and very noisily swamped our neighbour’s fig tree. We suspect that the fruits were ripe and the starlings had discovered this. For five or ten minutes the tree and the surrounding television aerials were covered in these comical and endearing birds. Besides being noisy, confrontational and surprisingly congenial, they are greedy.

We’ve stopped putting out fat balls in the garden because it’s becoming too expensive. In the morning we’d hang six fat balls from the trees – there would then be a very noisy invasion by the starlings and within less that an hour the balls would vanish. The birds managed to do that whilst apparently spending most of their time and energy arguing with each other over who has first noshing rights.

Happily sparrows have returned to our garden. Close attention to these delightful birds explains their affection in English gardeners’ hearts. Besides their delicate features, their chirpy song and feeding habits; especially in the spring when the adult birds feed the fledglings on the branches, it is their unassuming plumage which marks them out.

Our two cats keep the ground feeders out of our garden, although when my wife is working in the garden she will be accompanied by a robin, who benefits from the freshly turned soil and the exposed grubs. Wood pigeons, collared doves and magpies are the other regular visitors to our garden. The magpie has grown increasingly bold – our cats now regularly share their food with one of a pair of magpies.

A couple of visiting foxes and a family of grey squirrels also share our little bit of wilderness.

A twenty minute walk in an easterly direction brings you to the edge of Epping Forest just off the Upper Walthamstow Road. From here you can walk round the large ponds in Higham Park, the golf course and over well ridden riding trails to Chingford. From there, if you have the energy and the weather’s fine, you can trek along the forest tracks all the way to Epping.

A similar walk in a westerly direction will take you to the Walthamstow Marshes. Turning south along the Lee (Lea) Navigation Canal will lead, eventually, to the Limehouse Basin, now one of the most densely populated places on the planet. With its high end restaurants and gastro pubs, large power boats and expensive gyms. It’s an interesting, if somewhat depressing, walk along the canal. Much of the dereliction remains, with the huge Olympic site bounded by bright blue fencing which is enlivened by much humorous graffiti. Other parts are given over to post modern blocks of flats which rudely intrude. Washing hangs from the balconies, makeshift curtains can’t hide many bleak interiors – such a contrast from the ideal shown in the show house brochures.

I’m unclear to what extent the residents of Walthamstow are aware of the delights that are only a short walk away. If they’re anything like me – not very. It’s taken me eleven years to discover that living where we do gives us access to significant part of the countryside and parts of historic, industrialised London.

Much has been made of the renewed interest in the country’s waterways as a result of the hike in fuel costs and the impact on road transport. We’re told that Tesco’s is now transporting its imported wine using part of the canal network. The canals near the Olympic site are being renewed and upgraded because so much of the bulk building materials can be carried more cheaply to the site than by road transport.

Is it wistful to imagine a renaissance in the London network of canals, with new businesses building near the canals, not because the land is disused and cheap but because it offers an economic means of getting goods and products to market? The large Tesco’s store at Bow is built close to the Lee Navigation canal as is the Edmonton store. Is it possible that one day soon they will be supplied by barges? And who knows local markets will grow up alongside the canal selling local produce which has travelled down the waterways of this country.

Maybe the waterways’ time has come – economic events have made developers, businesses and transport companies to look again at the economics of distributing and carrying goods and services by water. The Olympic site at Statford has reawakened interest and expenditure in the local waterway infrastructure. The hope is that this will not rest only on supplying the building of the site but will be used to develop the waterways as a permanent recreational and commercial asset.

And who knows - Walthamstow may become a vital hub of our renovated waterways.